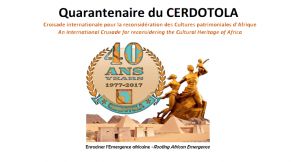 An international Crusade for reconsidering the Cultural Heritage of Africa 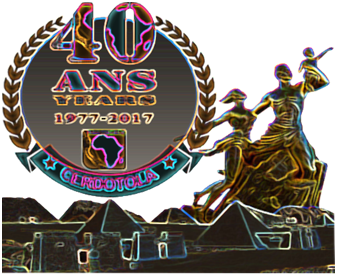 ”. Such is the warning the English poet William Blake gave British authorities and social forces between the first two industrial revolutions.

This warning was largely taken into account and, because the country implemented the principles behind it, became an example of over-accomplishment, even as it consisted on a few islands hardly visible on a world map. Thus, as England valued the advantages of its insularity, it gained control of the seas and became the first world power of its time and,  half a century later, the only empire in history where the sun never set.

Today, Africa is at a critical crossroads. Whether this has overtly been admitted or not, the failure of the successive development policies that have been formulated and imposed on her as a straitjacket for a century, has ultimately plunged the continent into abyssal depths of non-development, non-existence, perplexity, and even the most abject doubt about her abilities and the conceptual and creative fecundity of the humanity of her daughters and sons. Hence, the urgent need to emerge ... Emerge to hopefully undertake the sustainable construction of her people’s renaissance; emerge to take hold of her Destiny.

In order to succeed, this legitimate projection of emergence and renaissance requires a refreshed look at precedents, without any anxiety of influence or obsession of authenticity that would exhaust itself in stereotype. It thus appears that in the specific period of history which has been almost exclusively labelled Renaissance, the cultural and scientific foundations were ubiquitous, given that the influx of arts and sciences from the Byzantine Empire played a leading role in the decompartmentalisation of medieval thought patterns and ushered Europe into modernity.

Subsequently, this principle was confirmed by the successive industrial revolutions in Western countries and, more recently, by the emergence of contemporary non-Western great powers such as India and China. This is a return in power of their civilizations which previously, in their periods of decline, were dominated and marked with the seals of marginalization and contempt.

Whether they are already constituted or still in the process of being constituted as global hegemonic centres, these emergent countries undoubtedly and unsurprisingly possess scientific, cultural and artistic institutions ranked among the most powerful on the planet. In addition to their internal cohesion and external competitiveness, they are the ones ensuring most of the soft power that makes their civilizations’ attractiveness, just as they are structuring the winning sectors and hubs of their productive economies.

This lesson from history calls out to Africa! Hence the urgency to rearticulate it with the monumental advantage lying in Cheikh Anta Diop’s project: enabling Africa to transition from civilizational decline to revival. It suggests constituting the successive periods of the heteronomous domination of Africa (slave trades, colonisations and re-colonisations) as long Middle Ages from which Africa can now finally emerge to achieve its renaissance. This is the anchoring point of an authentic emergence that calls for new, organised uses of reason. For it does not suffice to have cultural resources, artistic production or more or less advanced competences in science and technology.

Their development, their valorisation, their revival or rise in power, as well as the dynamisation of the sociopolitical entities in which they manifest themselves depend on an objective criterion that is also the most decisive factor of consolidation: institutionalisation. In effect, it is when institutionalisation reaches a suitable level of operative adequacy that society generates relations of accelerated, reciprocally ameliorative adjustments between components of the triad made of institutions/practices, productions/innovations, and resources/societies.

The situation and stakes then beg the following question: to what extent is this lesson whose universal significance is henceforth unquestioned, taken into account as far as Africa is concerned?

Admittedly, the Agenda 2063: the Africa We Want,  which was adopted by the African Union in January 2015, defines a global path to Africa’s emergence that accounts for the lessons of the last fifty years. Before this Agenda, the 2011 report on economic development in Africa, which was prepared jointly by the United Nations Conference on Trade and Development (UNCTAD) and the United Nations Industrial Development Organisation (UNIDO) and which was entitled  Promoting Industrial development in Africa in the new global environment, prescribed a holistic approach to industrialisation.

A decade earlier, the century had opened with the launching of the African Renaissance project, for which NEPAD was created to serve as a strategic, operational and investment framework. In the meantime, NEPAD has become an agency. Nevertheless it is notable that, the unfolding of time and the accumulation of experience notwithstanding, Culture has at no time benefited from a comparable level of institutionalisation.

Yet, what do we observe globally in this respect? Everywhere, culture increasingly rises as a site of new international and civilizational stakes, setting new frontiers and drawing the new Development mapping. The following are particularly noteworthy:

However, the structural and situational difficulties generally confronting African cultural and scientific institutions (CSI) are embedded in a two-fold vicious circle. On the one hand, weak CSIs are only marginally involved in development policy, and consequently of little impact in the recovery efforts of states, Regional Economic Communities or the continent as a whole; they cannot help rebuild societies. On the other hand, societies with low cultural and scientific density remain unable to set strong trends toward reconstruction and take-off, thus remaining bound to generate weak CSIs.

With compromising consequences, African dynamics in this regard appear to be far from the reciprocal consolidation scenarios between institutions, economies and societies that were highlighted from the start by economic and innovation sociology in the analysis of transformational changes characteristic of industrialisation processes. In this field, it is useful to evoke the institutional school represented by Thorstein Veblen, John Commons and Wesley Mitchell. They describe a basic triangle in which, it will be proven, economic take-off (Rostow) accelerates the consolidation of the three poles: the economy as the fundamental factor that conditions the life of societies, technology (the whole set of know-how and techniques of a society at a given time) as the most crucial element within the economic frame, and institutions – particularly cultural – as catalysts for the societies’ momentum.

All the same, the deficient activation of such dynamics in Africa is explained less by the lack of CSIs than by their not being put into productivity. Africa is indeed rich not only in institutions but also in coordination initiatives at different levels, as exemplified by the adoption of the Pan-African cultural Manifesto (Algiers, 1969), the formulation of AFRICACULT (Accra, 1975), the promulgation of the Dakar Plan of Action (1992), the proclamation of the African Cultural Renaissance Charter (Khartoum, 2006), etc.

The crux of the matter is that, with their insufficient involvement in stakes and initiatives, with their lack of credibility and the low level of implementation of recommendations, African CSIs have come to enjoy very limited faith from partners, inner or outer. Civil society, the private sector and governments in many countries have reduced their encounters and discussions on the cultural dimensions of development to mere verbal exchange, with an abundance of reports devoid of pragmatic significance or follow up.

Thus it has now become urgent to foster reflections on the matter differently. This urgency confronts us with a strategic imperative at the highest level that must be satisfied with multivalent expertise capable of enabling synergic mastery of the stakes and challenges of Emergence and Renaissance.

It is in a bid to identify and to respond to these stakes and challenges from a holistic institutional involvement perspective that CERDOTOLA, as an Intergovernmental Institution, has resolved to devote the 2017 international symposium, which falls within the framework of the celebrations of its 40th anniversary (1977- 2017), to this question. It aims to structure scientific reflections and inquiries of large scope and high impact, capable of producing the most pertinent and most operable answers on the basis of five main thematic directions of advance:

CERDOTOLA 2017 Conference falls within the framework of deepening reflections and actions undertaken by CERDOTOLA in the dynamics of its maturity. The 2015 international Conference on the place and role of traditions in Africa’s structural transformation highlighted the sources and resources which must be tapped into, given the necessity for emergence to be endogenous and culturally sustainable to ensure the advent of authentic, optimum African Renaissance. This led to the idea of an African Pact for Development and Emergence through Traditions (PADETRA). With the support of the other CSIs present at the SICADIA (Summit of Cultural Institutions of Africa and the Diaspora) that will be held on the fringe of the 2017 Conference, CERDOTOLA will call on all African states to conclude this Pact. For it is science and techniques mobilised by institutions rooted in the culture of the locus that will transform resources into values capable of ushering in the dawn of a renascent Pan-African civilisation.

As a program for industrialisation based on African traditions, the PADETRA is intended to be an unprecedented and unparalleled driver for power in the 21st-century Africa. Following this new approach, cultural and particularly traditional resources are ways of fecundating emergence policies to generate a vast operable field of knowledge, know-how and paradigms resulting in a New Industrial Spirit capable of reforming understanding, cognition and systems of production. Concepts of specificity and endogeneity thus emerge, with their deep core that fosters industrialisation as stemming from the proper historical trajectories of societies and economies, hence overcoming the limitations of the failed “granted development” model.

With the aim of fostering coalescence with government and social forces, plainly taking the part of Emergence and Renaissance without neglecting their conceptual clarification, reflections at the conference will privilege core stakes and explore applicable approaches, solutions and perspectives, culminating in a movement that has been evaded for too long, namely: thinking out and acting for Africa’s rise to power.

Taking the form of written out articles, drafts or a (250-300 words) summary accompanied by a brief bio-bibliographical note indicating the title, position, grade and institution of affiliation, proposals should be sent simultaneously by June 20, 2017 to the following email addresses: contacts@cerdotola.org,  cgp.ds@cerdotola.org,  biem@post.harvard.edu